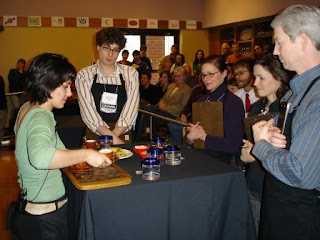 3 Local Barista from Open Eye Cafe & Caffe Driade have been featured in a new book
by Michael Turback entitled Coffee Drinks
(published by 10 Speed Press, a premiere publisher out of Berkeley, CA).

The book features that ultimate expression of unique coffee creations, The Signature Drink – using espresso and unique culinary components -that have been featured in National & Regional Barista Competitions across the U.S. and beyond.
These drinks, according to the guidelines of the competition, are visually stunning, amazingly creative, and best of all, complete knockouts when it comes to taste…specifically the careful balance in blending espresso and the flavors of the components the Barista decides to utilize.
3 drinks featured in the book came from Baristi that work at Scott Conary’s Carrboro/ Chapel Hill Cafe’s, and were selected for all the reasons above, but also because the Barista finished high overall in the competitions where these drinks were featured!
Lena Abed of the Open Eye Cafe featured her drink, The Kiva Han – 2nd Place Southeast Regional Barista Competition – 2005.
Erik Karlsson of Caffe Driade featured his drink, Swedish Coffee “Cake” – 6th place Southeast Regional Barista Competition 2005.
Elizabeth Justus co-owner of Open Eye Cafe featured her drink the Macchiato Brule which utilized twin brule torches to great effect- 2nd Place Southeast Regional Barista Competition 2003.
Scott Conary, Owner of Open Eye Cafe, Caffe Driade & Carrboro Coffee Company (Chapel Hill & Carrboro’s ONLY Coffee Roastery), & International Barista Judge, aided writer Michael Turback (10 Speed Press) with his new book “Coffee Drinks”, which has been published and is available for sale.
Michael acknowledges Mr. Conary in helping him compile the drinks and in learning the general knowledge of coffee, and specifically, espresso in regards to the Barista culture, including Barista Competitions.
Mr. Turback notes that in regards to these competitions, “nowhere is coffee more imaginatively explored or more elegantly presented”, and that recipe contributors include “notable coffee purveyors and a highly competitive cadre of award winning baristas…who raise the bar and then they jump over it…” .
While meant to highlight the craftsmanship and artisan sensibilities of the Barista & their creations, the book also features easy to follow recipes and descriptions that are accessible to the home brewer/Barista.
The drinks are described both for content and the background or historical context for their creation; such as Lena Abed’s Kiva Han, named for the first coffee shop in Constantinople. Her drink echoes the flavors of her Lebanese heritage, featuring cardamom & cinnamon.
for more info on Barista Competitons, coffee in general or the book itself, please contact Scott Conary at coffeescott@gmail.com
View Sidebar