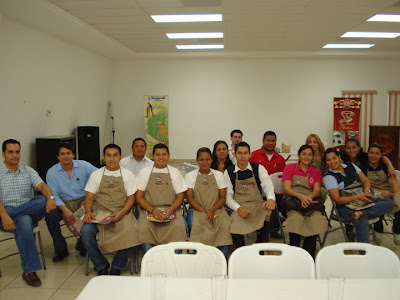 International barista judge and trainer Scott Conary travelled to San Pedro Sula, Honduras from Carrboro, NC to continue his training of baristas there & aid them in training for the 2nd Honduras National Barista Championship, to be held May 3-5, 2010.

This was only be one segment of the work Mr. Conary accomplished in his week long journey thru the coffee growing regions of Honduras. “Part of my trip was dedicated to renewing relationships with farms and growers we have worked with in the past, including the farmers of the Cup of Excellence coffees we carry, and also to look to creating new direct relationships with other growers of phenomenal coffees.”

Mr. Conary served as a judge for the 2007 Barista Competition in Honduras, as Head Judge at the World Barista Championship (WBC) in Atlanta last year, and for this year’s WBC competition in London, UK. “This is a program that will be crucial for Honduras staying current in the industry at large, and to keep them progressing both as a quality coffee producing country, and for their internal Café culture. I was pleased to see the Competition followed thru on so successfully in 2007 and think that the 2010 Competition is another important step in the continual education and increase in the quality of Honduran coffee.”