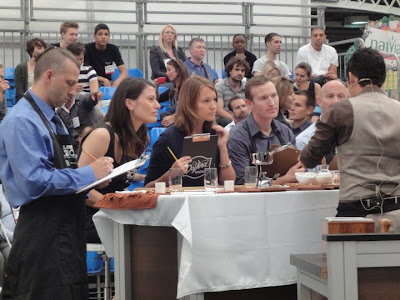 It would be easy to make comparisons between the 2010 Soccer World Cup, located in South Africa, and the World Barista Championship happening simultaneously that same year in London. Not to say I am above it. I may yet find my way there considering there are more than a few things in common. Team play, shining stars of talent, hard work and a passion to succeed and move on thru the groups.
All this is true and worth noteing, but I think I will start with the end; the results. For the first time in the history of this 10 year old event the winner was from the United States. A couple had come close before, closing in on the top 6 with the highest being a 2nd place finish by 2 time U.S. National Champion Heather Perry in Tokyo in 2007. Even this years Champion was seeing his second time as the U.S. Champion and a shot at the World Title; having finished 3rd in the World last year. So, this year certainly marked quite a triumph for Michael Phillips from Intelligentsia Coffee in Chicago; a satisfying end to his years of hard work & diligence in training to be the Worlds Best Barista.
Beyond this determined and happily succesful result we see great changes happening around the world in the Barista profession, from the semi-final & finals of the Championship. Growing countries; the countries where coffee originates and that have largely been slightly behind the curve in the arena of Espresso preparation, have been infiltrating the ranks of the worlds best.
For the first time in London this year we have the highest place ever gained by a representative of a coffee growing country. Raul Rodas from Guatemala, a 3 time Champion from his country, finished an amazing 2nd place overall against perennial professionals and truly gifted Baristas from countries such as Ireland, Australia, Greece & Denmark. Raul worked hard over the years under stressful conditions to meet these competitors as peers, and a master of his craft, and it paid off with this exceptional result.
This is not to ignore those that came before in past competitions, helping to breaki this “glass ceiling” of sorts. Competitors such as Ana Lucia Hawitt from Honduras who was the highest finishing competitior from a coffee growing country ever at the championships in Copenhagen in 2008; finishing 15th and showing others what was possible. They obviously paid attention, as this years competition broke another record; the most competitiors from coffee origin in the semi-finals! Brazil, El Salvador, as well as Honduras (represented by Ana Lucia again after her country failed to support a Champion in 2009), and Guatemala were all solidly represented in the group of 12 semi-finalists, earning them a place in the record book.
While these were important and historic highlights, they should never allow us to ignore the greater good, the bigger picture that this Championship, and barista competitions all over the world, does to raise the level of awareness, skill and knowledge that both Baristas and the public have risen to. This event has shown itself to have that ability…it has made baristas strive to make excellent drinks and customers to expect them. Why not? Not only can it be done, it should; since the outcome is that much more enjoyable for everyone; barista as craftsman, and customer as recipient, of an award winning drink.

The World Barista Championship (WBC) is the preeminent international coffee competition. The organization—founded by the Speciality Coffee Association of Europe and the Specialty Coffee Association of America—focuses on promoting excellence in coffee, advancing the barista profession, and engaging a worldwide audience with an annual championship event that serves as the culmination of local and regional events around the globe.
Each year, champions representing more than 50 Nations each prepare 4 espressos, 4 cappuccinos, and 4 original signature drinks to exacting standards in a 15-minute performance set to music.
WBC Certified Judges from around the world evaluate each performance on the taste of beverages served, cleanliness, creativity, technical skill, and overall presentation. The ever-popular signature beverage allows baristas to stretch their imagination and the judges’ palates to incorporate a wealth of coffee knowledge into an expression of their individual tastes and experiences.
The top 12 competitors from the first round advance to a semi-final round to choose the top 6 competitors for the finals round… from which one winner is named World Barista Champion!
2011 Bogotá, Colombia . . . Come find out!
2010 London, United Kingdom Michael Phillips (United States)
2009 Atlanta, USA Gwilym Davies (United Kingdom)
2008 Copenhagen, Denmark Stephen Morrissey (Ireland)
2007 Tokyo, Japan James Hoffmann (United Kingdom)
2006 Berne, Switzerland Klaus Thomsen (Denmark)
2005 Seattle, USA Troels Overdal Poulsen (Denmark)
2004 Trieste, Italy Tim Wendelboe (Norway)
2003 Boston, USA Paul Bassett (Australia)
2002 Oslo, Norway Fritz Storm (Denmark)
2001 Miami, USA Martin Hildebrandt (Denmark)
2000 Monte Carlo, Monaco Robert Thoresen (Norway)

Scott Conary is the owner of Carrboro Coffee Roasters., Open Eye Café & Caffe Driade in Chapel Hill, NC. He is the Chair of the USBC Committee, a member of the WBC Judges Training Committee & a World Certified Judge of barista competitions and trainer. He is an SCAA accredited instructor in various aspects of the coffee industry, and travels to coffee growing countries to support and work with coffee farmers and other aspects of the coffee industry.

The 11th World Barista Championship occured on June 23 trhu 25th in London, England this year. After having proved their skills at their National Championships, 54 baristas came to represent their country and vie for the opportunity to be considered the World Champion for 2010. Countries from around the world were represented, from Thailand to Denmark, Brazil to Japan, and Uganda to Costa Rica.
In the Olympia Hall in West London, for 3 days, these Champions strove to connect with judges, showcasing coffee they thought was exceptional and wanted to share with the judges and the world, as well as show their overall skill, knowledge and passion for the craft of a Barista.
The first 2 days were dedicated to round 1, allowing 30 highly experienced judges, who underwent a 2 day certification process, to evaluate all 54 competitors and determine who will move on to be in the top 12 of the Semi-Finals the next day.
A impressive list of countries moved on, including many countries often seen as contenders, but also including, for the first time, many representatives of coffee growing countries. The top 12 were:
Guatemala, Honduras, Denmark, Greece, Brazil, Ireland, UK, Canada, El Salvador, Australia, USA,

With only a few hours to clean up and prep for the finals that same afternoon, 6 Barista’s moved on: Gualtemala, Denmark, Greece, Ireland, Australia, USA.
With a reasonable but close margin of 15 points, Michael Phillips of the U.S. Won the 2010 Championship over Raul Rodas from Guatemala, who in turn edged out Scottie Callaghan from Australia by 20 points. This marked the first time a Barista from a coffee growing region has been in the top 3 and that the U.S. has won the Championship.