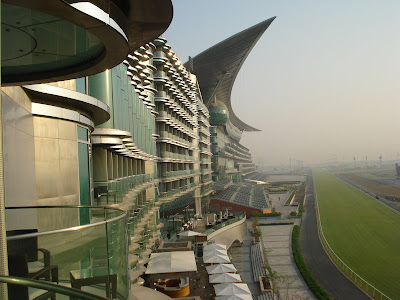 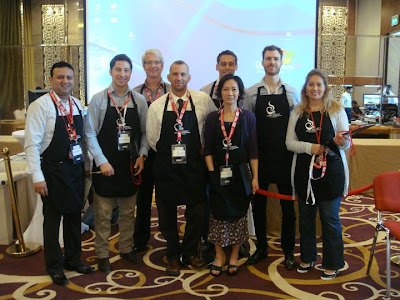 My recent travel has brought me back to Dubai in the UAE – ex-oil, newly found vacationland ( sorry Maine…). Not your average vacation of course. I describe it as Las Vegas X100. When the oil ran out, the economy had to re-focus. The reorientation was about high end, wonderland-like tourism. Who else would drive themselves into 12 billion dollars of debt to build islands shaped like palms ( I think they look more like horseshoe crabs) and the World ( want to buy and live on Scotland?)? The Hotel complex where the Championship & Convention was held is the longest in the world ( 1.4km), and all suites ( there are no ordinary ‘rooms’) faced the racetrack where the World Cup racing is held, and camels race as a warm up.
I was there for coffee.
I know what you are thinking.
In a city that was desert 20 years ago, it is hard to think of the hot beverage as being a hit. What is popular in Dubai is making money. The newest craze ( along with massive aquariums in every mall) is the coffeehouse feel and what I call Phase 1 of quality coffee consumption. These attempts are largely driven by larger corporations at this point; just for the sheer ability to cover all the newly built retail acreage, but also for the over-the-top slickness image needed. This is a place where all the top names in retail are the standard in malls – malls which are complexes with hotels, and self-sustaining with functions such as indoor water parks and ski slopes. There is a range of course, but nothing is shabby, and some areas feel like they cost you money just to look at them. Armani has a Café in one of these areas.
So you will see some slick Italian & Australian origin chains who are introducing folks to the first step in quality coffee – the lingo….and an OK cup from time to time. Consistent quality still eludes these players (and in some instances quality at all).
Enter Raw Coffee Company. A Café, that has recently entered the coffee roasting arena, attempting to further their control over the quality of their product.
The owners of this independent company have specifically shown their desire to succeed via quality over the past two years. Last year, at the First annual UAE Barista Championships ( for more info on competitions, see: www.worldbaristachampionship.com ), Owner Kim Thompson, a New Zealand Ex-Pat, took second place in her first attempt at the competition. This year she returned to certify as a judge for the competition and entered ( and trained) several employees on their way to success – her employee, Raja Muthusamy became the 2nd National Champion of the UAE.
The coffee made by these folks is the next phase in quality driven coffee by people who understand what it takes to make excellent coffee, not just money, and still succeed.
Look them up if you are tired of the poor quality coffee served at the Hotels ( sadly even the most expensive ones haven’t figured it out yet.), or have had enough cardamom and cinnamon in your overly sweet coffee. Tell Kim I said Hello. She’s full of energy & fun to talk to.
Oh, and for you foodies out there, camels milk is the most common form, and proclaimed to be the perfect food! I will let you decide for yourself. I found it rather savory/salty and really took over any coffee it was served with.