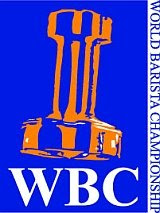 Scott certified to judge by having passed the intense 2 day certification course. Scott is one of only 7 judges from the U.S. to have passed the certification class, and the only judge from NC.
Scott has lived in Carrboro/Chapel Hill since 1995, and has made it his mission to the community he lives in, and the coffee community at large, in his work to marry quality with sustainability by creating “Carrboro’s Living Room” in the Open Eye Café; a luxurious European Garden Café in Caffe Driade, and by sourcing & roasting the best quality coffee the world has to offer, as Carrboro Coffee Roasters.

Scott has been active in judging these coffee competitions since 2003 where he judged the first Southeast Regional Competition that took place in Southern Season’s cooking classroom in Chapel Hill.

Scott has been a WBC judge for the last three years: Berne, Switzerland in 2007; Tokyo, Japan in 2008 where he served as a Head Judge; and Copenhagen, Denmark in 2008; making this years Championship in Atlanta his 4th.
He has also served as a Judge for the Guatemalan, Canadian & Honduran National Barista Competitions in 2007 & 2008, as well as being a current member of the SCAA United Stated Barista Competition (USBC) Committee & Judges Certification Committee.

All Barista competitions worldwide reward demonstrated excellence in the art and skill of preparing and serving espresso. Entrants must make 12 beverages, including four espressos, four cappuccinos and four original signature drinks of their own creation, within 15 minutes in front of a panel of accomplished & certified industry judges. Competitors are based on taste, beverage presentation, technical skills, coffee knowledge and passion, and overall impression.